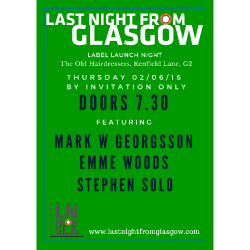 We are proud to announce that the third and final act performing at our launch night will be Stephen Solo (aka Stephen Farrell singer/songwriter of Sonny Marvello) In 2015 Stephen began working on a solo project, his ambition to record, mix and master an album using only mobile technology and mobile apps. By the end[…]