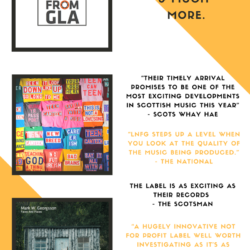 In 2016 we launched and the 150+ members received 5 vinyl releases (2 LPs and 3 singles), 2 USB releases, a single download and invites to several free launch parties.  We are now open to new members for 2017 and we have already announced Medicine Men’s debut album (released on vinyl in May 2017). Albums are[…] 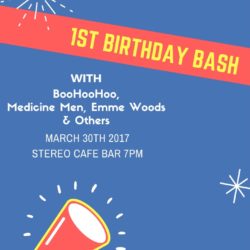 Help Celebrate our 1st Birthday with an exclusive concert at Stereo Cafe Bar – Renfield Lane Glasgow on Thursday 30th March 2017. Performances from LNFG Acts Old & New including BooHooHoo, Medicine Men, Emme Woods and Others. Free Entry for all 2017/2018 LNFG Members.  Tickets available for non-members at our store for £10.