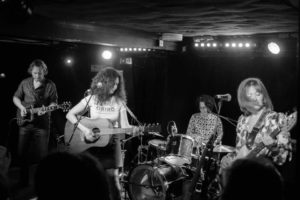 Sister John are a band of four multi-instrumentalists from Glasgow, formed around the songwriting of Amanda McKeown.

When we first heard their debut album, ‘Returned From Sea‘, we described it as “stunning – really, really properly beautiful, it feels like our very own Tupelo Honey or Music From Big Pink, something quite exceptional”.

‘Returned From Sea’ explores themes of loss and redemption, the individual in the world and the tangibility of the past in the present.

Released in September 2017, ‘Returned From Sea‘ made a big impression:

“One of the minor triumphs of 2017, a gorgeous, sparse record” – The Skinny

“songs which have a casual, unshowy grace and maturity” – The National

With barely a pause, their much anticipated eponymous second album was released in January 2019. The band launched the album at a sold out gig at Glasgow’s Poetry Club before making their first appearance in London at a sell-out show at the Sebright Arms, with more shows coming this year including at Long Division Festival in June.

Pushing forward their ‘lo-fi lush’ sound, ‘Sister John‘ adds driving indy rock, killer vocals, and strut and swagger to the folk-infused dramatic soundscapes and layered harmonies of ‘Returned From Sea’. It pushes their sound to the edges, exploring darker corners albeit with a wry smile.

“The Beatles jamming with John Cale” – Trust The Doc

“This is definitely special. A tremendous work of art, that is engrossing from both a musical and lyrical standpoint, and it will almost certainly rank as one of the finest scottish records to have seen the light of day in 2019” – Small Music Scene

If you are interested in booking Sister John or wish to discuss support or festival slots then email sisterjohn@lastnightfromglasgow.com

Sister John are signed to Last Night From Glasgow, a patron-funded not-for-profit record label founded on the principle of putting artists and their music first. Our membership model allows us to release music without saddling our artists with debt and ensures they receive the renumeration they deserve. Our packages offer tremendous value for members, view them –here–.