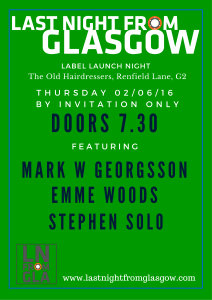 In 2015 Stephen began working on a solo project, his ambition to record, mix and master an album using only mobile technology and mobile apps. By the end of the year Stephen had recorded Pii (Phoning it in) using his trusty iPhone 6 and predominantly the mobile app Garage Band.

When we heard the album we felt very strongly that it deserved to be released but that such release should respect the medium and intention of the project and thus on 03/06/2016 Last Night From Glasgow will release it’s first Digital Only album. Members of the label will receive their copy free at the launch night whilst a further very limited supply will be made available on our website – each housed in an LNFG/Pii Branded USB Credit Card.

Much more information on the album and it’s process will be revealed in the coming days via our newsletters, members forum and Facebook pages. You can pre-order the album in our store and you can subscribe to our newsletter here under.