Released on 31.08.2018 and to be launched at the grand opening of The Great Eastern, Glasgow’s Gracious Losers combined the celtic soul sensibilities of early 70’s Van Morrison with the interplay and prowess of Neil Young & Crazy Horse. Eight tracks dripping in classic songwriting and musicianship and engulfed in the most beautiful of gatefold sleeves, designed by none of other than graphics legend Sean Philips.

You can pre-order a copy Here

Tickets for the launch event can be bought here : 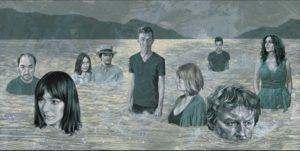