We are thrilled to announce that TeenCanteen’s debut album Say It All With A Kiss has made the long list for the SAY award. Beating off 280 other competitors, they now stand alongside such luminaries of the Scottish Music Industry as Mogwai, Teenage Fanclub and The Jesus & Mary Chain as having released one of the twenty best albums of 2016.

The longest will be whittled down to a final shortlist of 10 in a few weeks from which one winner will be selected. 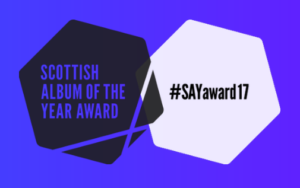